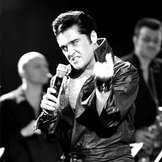 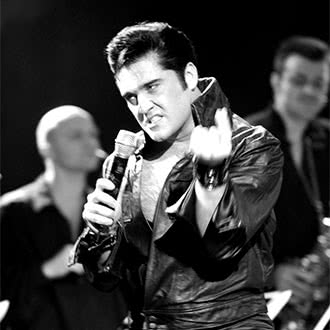 Grahame Patrick was born and raised in Dublin. He was literally born with his passion to music: His father, who has always been a great example for him, used to be a musician as well.

His admiration for Elvis’ music and the idea to work as a double for the king of Rock’n’Roll developed early: ‘I wanted to impart my admiration for music to other people in a realistic and sensitive way, but move them honestly as well.’

At the beginning of the 1990ies, when he was a teenager, Grahame Patrick and his parents moved to Toronto (Canada) where he had first gigs as an Elvis double in Bars and Clubs. One day, a producer spotted him as an Elvis doppelgänger at a party and offered him a contract by the end of the night. This contract resulted in different engagements all over the USA. For several years he performed on stage in the El Dorado of showbiz, Las Vegas.

One of the highlights of his career was to perform as opening act for the soul legend Dionne Warwick. Since March 2003, you can spot Grahame Patrick in the live show ‘Stars in Concert’ at the Estrel Festival Center in Berlin regularly. In August 2004 he got on stage for ‘ELVIS – The Musical’ at the E. F. Center for the first time.
The two-hour performance honoring the ‘King’ – from adolescence to adulthood - allows him to demonstrate his versatility, to impress the audience with his fascinating resemblance & powerful voice and to show his great talent as an artist. 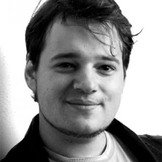 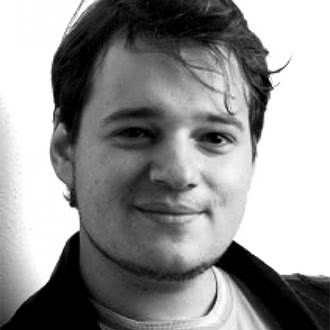 Born and raised in Besigheim, which is located next to Stuttgart and one of the most beautiful wine growing cities in Germany, Daniel Neumann already went on stage when he was a little boy - no wonder his career aspirations seemed clear pretty soon. After completing the A-levels he was trained in acting, singing and dancing at the Musical and Drama School in Freiburg.

In 2010, during his apprenticeship, he already went on stage as ‘The Big Bopper’ for ‘That’ll be the day – Das Buddy Holly Musical’ – a Stars in Concert production at the Estrel Festival Center in Berlin.
During the following years he used to have engagements in Freiburg and Stuttgart, for example as ‘Max Bialystock’ in a musical by Mel Brooks called ‘The Producers’, as ‘Yvan’ in Yasmina Reza’s ‘Kunst’, as ‘Adam’ in Neil LaBute’s ‘Das Maß der Dinge’ and many more.

Since 2012 Daniel has been working as singing teacher and producer. For example ‘Die Spielverderber’ by Michael Ende, ‘no(r)way.today’ by Igor Bauersima, ‘Footloose’ by Dean Pitchford, ‘Spring Awakening’ by Dunkan Sheik, ‘Einer flog über das Kuckucksnest’ by Dale Wasserman or the production of Bodo Wartke’s ‘König Ödipus’, which was honoured with the LAMATHEA, the state prize of Baden-Württemberg, as best production working together with children and adolescents.
Before Daniel slipped into the role of Elvis’ smarmy manager ‘Colonel Parker’, he had been performing on stage in Wladimir Kaminer’s ‘Russendisko’ as well as in Moliéres ‘Don Juan’ at the Theatre Atelier in Stuttgart. 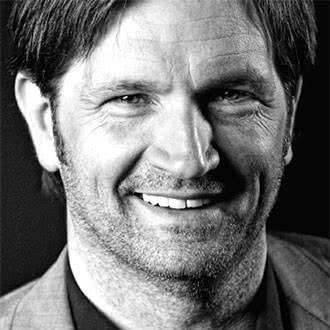 Berlin is Alexander Gregor’s adopted city. He was trained to be a screen and stage actor at the well-known ‘Atelier Langhanke’ and as a result was involved and undertook important roles in various plays. The TV series ‘Dr. Sommerfeld, Neues vom Bülowbogen’ led Gregor to the ARD (first German national TV channel) in 1998. Numerous film projects like the movie ‘Befreite Zone’ or the comedy series ‘Schräge Kerle’ came next.

Not long ago, he played the leading role in the American film ‘Able’ as well as in the German production ‘Bulle brennt’. In ‘ELVIS – The Musical’ he slips into the role of Elvis’ crafty manager Colonel Parker. 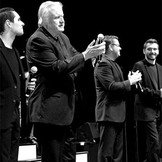 The legendary Stamps Quartet from Nashville/Tennessee is world-famous and accompanied Elvis Presley on his tours from February 1971 until his sudden death in August 1977. Elvis has been their friend for many years and used to invite them every night after his shows in order to perform for his friends, e. g. Tom Jones, Jack Lord, Charlton Heston, Art Linkletter and many more. Until today, the Stamps have been the oldest professional gospel quartet in the history of America.

Ed Enoch, the original lead singer of the Stamps, and his new formation are now on tour with ‘ELVIS – The Musical” in 2019. He had started his career as a professional musician as baritone singer for the Stamps Quartet in 1969; afterwards he became the lead singer and road manager for the group.

‘Working for Elvis Presley was a wonderful experience. He was in a class of his own and his love for the Lord and his fellow men was unique.’ It was a very meaningful experience for Ed to perform on stage and to hear how his friend Elvis Presley introduced him to the audience: ‘Ladies and Gentlemen, please welcome my friend and the strongest and best singer of the world: Ed Enoch!’ 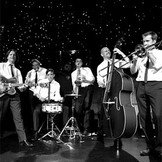 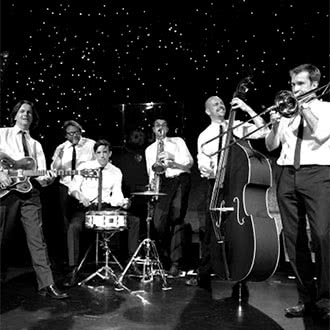 This band knows how to groove!
The band, which consists of seven people, is able to represent Elvis’ Rock’n’Roll live and authentically. The trained musicians have mastered their instruments perfectly and are an excellent coordinated team.

It doesn’t matter whether it’s blues, rock or ballads – the Las Vegas Showband performs the different styles of music with superior ease and thus is able to revive the golden age of Rock’n’Roll playfully. To keep your feet still when hearing this rousing performance is nearly impossible! 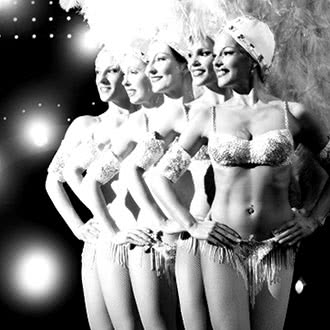 The Heartbreakers are showgirls par excellence! The beautiful dancing girls enchant the audience not just because of their appearance with their slim silhouettes and long legs, but are also able to dance excellently.

The Heartbreakers bestow the real show feeling on the musical and manage to create the impression, that the evening would take place in one of the well-known casinos of Las Vegas.